Yesterday I went skiing with two of my favorite people on this planet; my cousin, Dave and my brother, Tom. We planned to ski Jay Cooke State Park and much of it’s amazing terrain. I had read on SkinnySki a few days before that it hadn’t been groomed yet, but we decided to give it a whirl. We’re an adventurous, untamed trio by nature and nurture; and we like a challenge more than often. Had we ever been on Double Dare as children, we would have picked physical challenge every single time. I’m sure of it.

We hit up a side access point to the park around 10am and set off for one hell of a ski session. The trails had not been groomed, just tracked in by one previous skier days before and then walked over by snowshoers for the first half mile. That didn’t deter us though. We went for it with gusto. We broke trail for over two hours, hitting up some delicious terrain hill after hill. I don’t remember the last time I took that many diggers. The second your ski went out of the track and entered 3 feet of snow territory, you were a goner. Face first, ass first, knees first—I was drenched in melting snow and sweat by the end of the ski. We let out whoops of delight as we raced down the hills of powder trying to keep upright. It was magical, back-country skiing at its finest. Just wish I had some wider skis that floated better. That was the best day of skiing to date. Thanks to Dave for the pics.

Waxing up the boards

The shallow end of the snow. 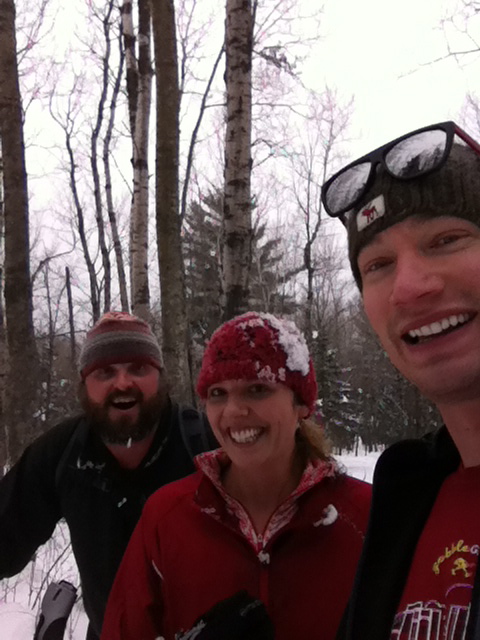